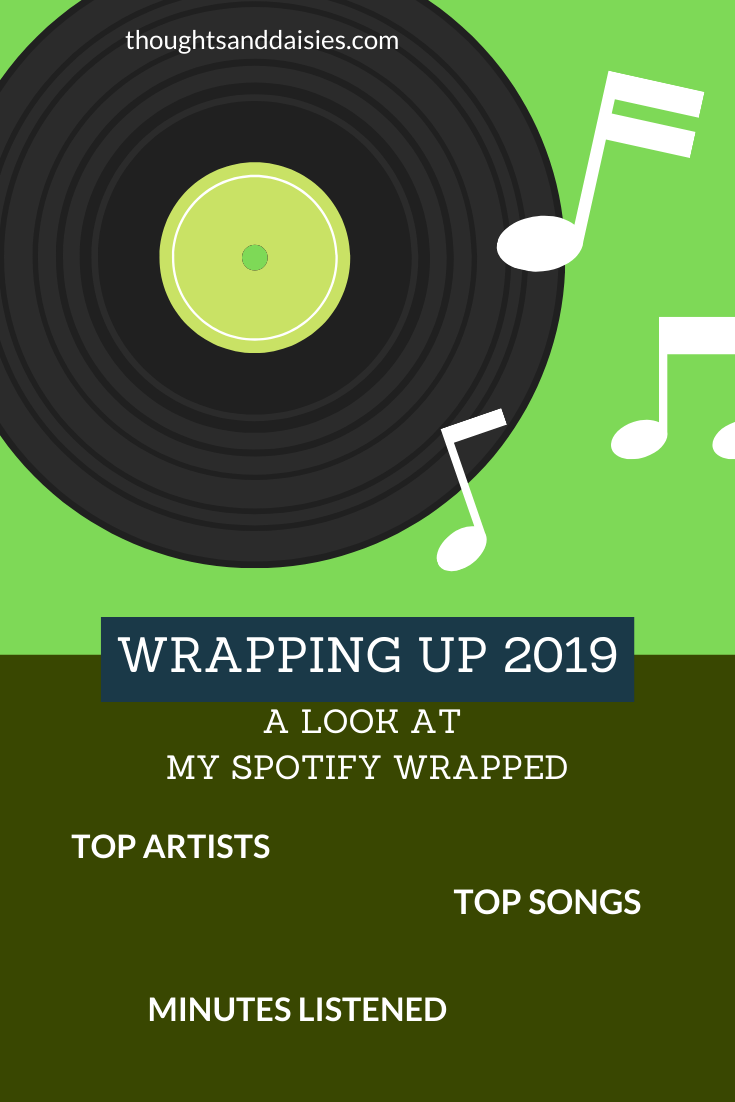 It does NOT in any way shape or form feel like it has been a year since I wrote the Spotify 2018 wrapped. Yet somehow here we are in December of 2019 with only a few weeks left in this DECADE. Since so many of you enjoyed seeing last year’s wrapped post I have brought it back.

In case you missed last year’s click,>HERE< to read that.

Comparing this Wrapped to that of 2018, in my top artist spot we have Taylor Swift again. Which I was actually surprised about. I did not think she was the artist I most listened too but she did release a new album this year so that may have helped. Pop has also taken the top genre spot two years in a row,  but that is where the similarities end. Let’s discuss this.

1. Taylor Swift. As I mentioned above she was my favorite artist last year as well. Taylor also released her newest album Lover earlier this year which is probably what pushed her back into the top spot this year. Let me know if you want me to write a post with my thoughts about the album.

2. Sabrina Carpenter. Sabrina also released an album this year, Singular Act II. I know for a fact that I listened to this album a ton, I even talked about it in my Summer Sounds post earlier this year.

3. John Powell. This top artist is kind of a funny story… For those of you who are not familiar with who he is. Powell is responsible for many fabulous movie soundtracks, such as Solo: A Star Wars Story, X-Men: The Last Stand and Knight and Day. The reason he is on this list, however, has to do with the movie franchise he has done music for. A little series called How to Train Your Dragon. The funny part of this comes in here. I am a BIG HTTYD fan. I can quote many a line from the first movie since I’ve seen it so much, but it is on this list because overall you can’t go wrong with songs like “Romantic Flight” and “Forbidden Friendship.” Anyway, my roommate came into the room and saw I had this playing on the Spotify on our TV and asked if I listen to this so much it will end up in my top spots on my wrapped. I, of course, had laughed and told her plainly that I don’t actually listen to it that much… I was just kidding myself and like she said, here it is taking the 3rd spot on my top artists.

4. Jonas Brothers. In case you have been living under a rock all of 2019 the JoeBros are back. They released their newest album Happiness Begins over the summer and it is everything you could have hoped for in a comeback album.

5. Maggie Rogers. Someone I follow on Instagram posted about a Maggie Rogers song earlier this year and I decided to see what the hype was about. As you can see I was hooked and she rounds out the top five spots of my artists this year.

2. Sucker by the Jonas Brothers

The beginning of my top songs list also accurately follows my top artist to include two by Sabrina Carpenter and the first single released by the Jonas Brothers this year. The next song on the list does not surprise me in the least. After watching Into the Spider-Verse a good four times I was properly hooked on Sunflower. If you haven’t listened to it please go do so right this very second. It has such a nice vibe and is an overall nice song. The last song is my favorite from off of Bareilles’ newest album. So again not surprised it is on here as I listened to it an unhealthy amount of times over the summer when it first came out. These are all good songs but if Pushing 20 had not come out at the beginning of April, just in time for me to listen to it on repeat during my last month of being 19, I don’t think it would have made this list.

This is just a small portion of the music that was shown in my 2019 Wrapped which added up to a total of almost 31,000 minutes of music or over 500 hours.

Spotify also released the ‘My Decade Wrapped’ let me know in the comments if you would like me to do a post on that!

What music did you listen to a lot this year? Let me know in the comments below and leave me any recommendations for what I should listen to next!

Related posts: What I’ve Been Listening To. Music of the Week.