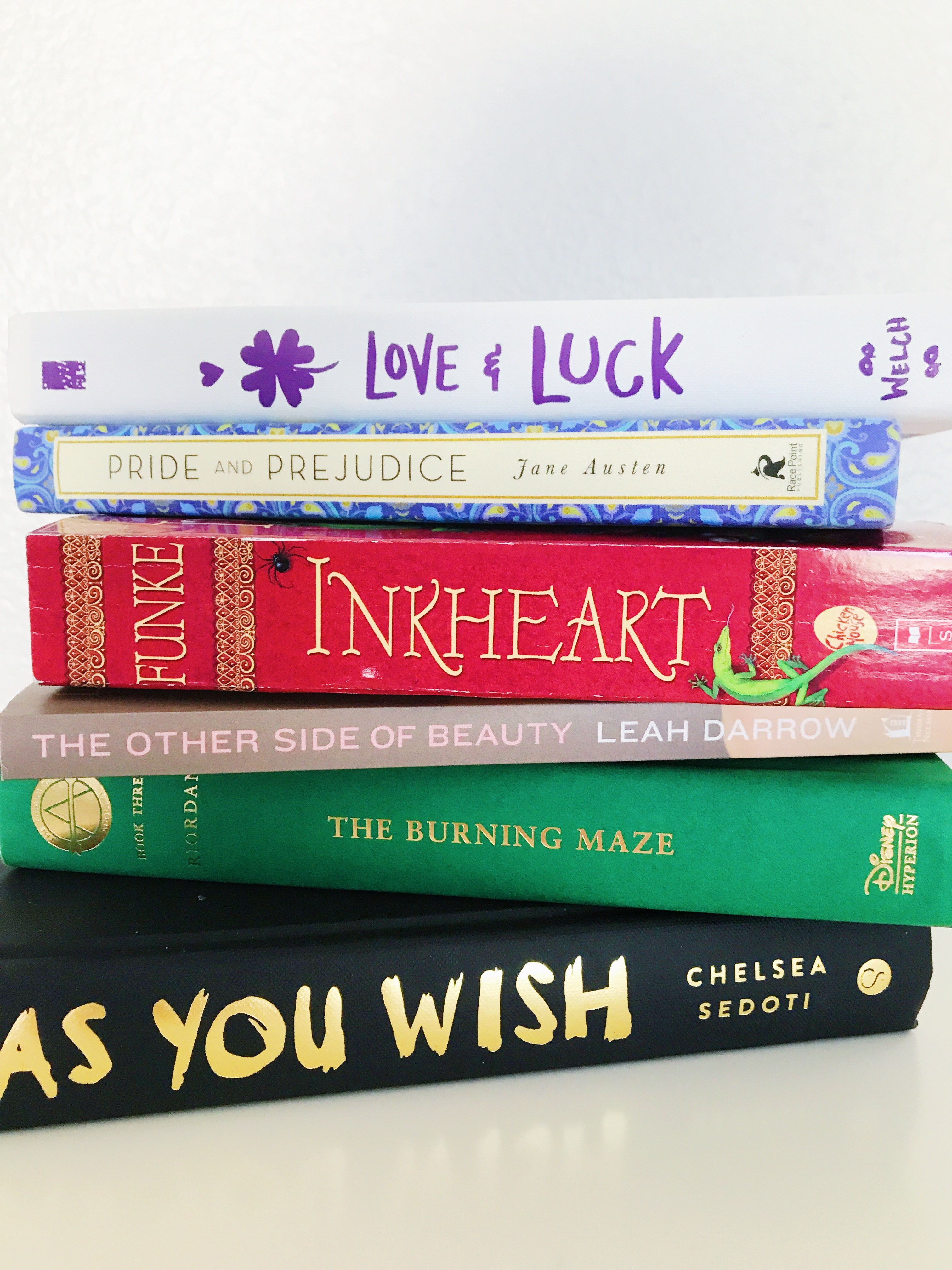 The leaves are starting to turn. The air is getting crisper. Fall is here and Summer has come to a close. Which means so has summer reading! Surprisingly I was so busy this summer that I read a good deal less than I have in past years, but that doesn’t mean I don’t have a lot to talk about! If you didn’t know, I am an avid book reader… aka an insane bookworm. Instead of talking about every book I read this summer I have chosen FIVE to talk about today.

–The Burning Maze by Rick Riordan

This is the 3rd (and most recent) book in the Trials of Apollo series, by the same author who wrote the Percy Jackson and the Olympians series. This five book adventure is centered around the god Apollo being sentenced to spend time as a mortal by his father Zeus. In his mortal state he is Lester Papadopoulos, and he will do anything to get his godly form back. The only way to do so is for Apollo to restore the five oracles who have vanished. In this installment he and his companions must travel into the Labyrinth to find the third emperor who has taken control of an oracle and is threatening to attack the Roman camp -Camp Jupiter-.

I have been a long time Riordan reader and this is no exception. This third installment had me in tears of laughter and tears of… nowhere close to laughter… if you know what I mean. Apollo is a fun protagonist to follow along with because while there are moments you want to punch him for his narcissistic ways, he also likes to say wittily horrible haikus and poems. Plus the longer he spends as a mortal the more ‘human’ moments you get to witness him having.

One of my favorite things about this series is that the great chapter titles are back, and this time in haiku form.  The first haiku seen in the first book (The Hidden Oracle) was

I would smite them if I could,

And after I read that I knew I was going to like this series.

I really enjoyed this book, even though it made me cry, a lot, but so far the 2nd installment might be my favorite of this series. I can’t wait to see what happens next.

–Pride and Prejudice by Jane Austen

I have been meaning to read this for some time now and am glad I finally got around it it.  My favorite movie of all time is ‘You’ve Got Mail’ and throughout the movie the main characters talk about reading Pride and Prejudice, so of course I knew I had to read it too.

Pride and Prejudice follows along with the fiercely independent, 2nd eldest daughter of the Bennet family, Elizabeth Bennet who must marry rich as her father’s estate is already entitled. Throughout the novel you meet a variety of characters all with very significant qualities that define them. Elizabeth learns the errors of making rash and hasty judgements as well as to appreciate the difference in the superficial and the authentic.

The beginning chapters of the book were a bit hard to read simply because of the nature of the language. Once I was able to understand the writing style it got easier. Although a bit of the middle section of the book felt tedious, as I was impatient to get to more interactions with Mr. Darcy, the last 100 or so pages is my absolute favorite part of the book. Much gets revealed, a lot happens in a short amount of time, and the witty dialogue progresses.

“And your defect is to hate everybody.”

“And yours,” he replied with a smile, “is willfully to misunderstand them.”

I now understand what many love so much about this book. It is one that I will definitely be re-reading in the future. The depth past a simple romantic plot line keeps this novel as timeless as it is. I highly recommend giving it a read.

Inkheart (the first in the Inkworld Trilogy) is about a young girl, Meggie, whose father Mo (Mortimer) repairs books for a living, and whose mother disappeared nine years ago. Her father has instilled his love of reading into his daughter, but what she never understood was why he never read to her aloud. Until, the very reason he doesn’t comes back to haunt him. Mo can ‘read’ characters out of novels but there is a consequence for characters coming out; and the day he read Inkheart aloud was the day all the trouble started. Now Meggie is in the middle of an adventure like those she has read about all her life, and she needs to learn to harness the magic before it is too late.

I watched the movie adaptation when I was younger and had forgotten it was a book. On my last long layover at the airport I popped into the bookstore and found Inkheart among the shelves and decided to give it a go. I love the idea of this book but the plot to me felt to be stretched a bit too thin. This book is over 500 pages and while I am normally all for long books, this one did not need to be quite so long. It takes about 150 pages to really get into the heart of the book, but there still seemed to be some lackluster. I didn’t hate it, but I think I would have enjoyed it better if it was more condensed.

–As You Wish by Chelsea Sedoti

As You Wish tells the story of a town where wishes really do come true. The town of Madison, located on the outskirts of Las Vegas in the Mojave desert, is different. Everyone who was born there gets to make a wish on their 18th birthday and it always comes true. The story is centered around Eldon whose wish day is quickly approaching. Some wish for money, or love, but Eldon has seen how those wishes have broken the people around him. This leads him to wonder if wishing can ever lead to happiness, and how to be sure he makes the right wish to get there.

The premise of the book really interested me because I know I have wondered what life would be like if something I wished was sure to come true. The book goes along to tell the stories of how wishing has gone wrong for all these people who believed it was their only way to live a happy life. It gives you a lot to think about, but overall I was not much of a fan of this book. There were moments that I really enjoyed and some characters that I wished I knew more about, but I was left dissatisfied. Maybe that could relate back to the aspect in the book that getting what you wish for can be unsatisfying. Either way it is not something I am likely to reread.

–The Titan’s Curse by Rick Riordan

The Titan’s Curse is the third installment of the Percy Jackson and the Olympians series. It follows Percy Jackson over his winter break as he travels across the country with two hunters of Artemis, a daughter of Zeus, and a satyr, as they race against the clock to search for the missing Artemis. For one thing, Percy wasn’t even supposed to be on the quest but he couldn’t let everyone else go searching without him. Not when his friend Annabeth is missing too. Oh and don’t forget, the Oracle prophesied that not everyone will survive…

While this book is a reread I couldn’t help choosing it to talk about. Percy Jackson and the Olympians is practically my favorite series ever. (If you know me you know I talk about it and the Kingdom Keepers probably more than I should -not sorry-) If I had to choose a favorite book of the five it might be this one. Though my favorite of them does seem to change every time I reread them…

This novel deals with doubt, defeat, resilience, loss, and following your gut throughout its 300+ pages. The characters all have their own character arcs and stories that you get to learn about, all while the heroes outrun monsters, gods, and even a wild boar. There are a ton of funny moments and one liners in this book, and as I said for the Burning Maze, oh the chapters titles how you make me smile. Titan’s Curse and the whole series in general is just a book for all ages.

“There is always a way out for those

clever enough to find it.”

I hope you enjoyed this post! Comment down below the last book you read and how you liked it. I am always looking for good book recommendations!

Other books I read this summer ( *indicates a reread)

–Disney in Shadow by Ridley Pearson *

–The Other Side of Beauty by Leah Darrow

–One Beautiful Dream by Jennifer Fulwiler

–Thicker Than Water by Bruce Hale *

–Ends of the Earth by Bruce Hale *