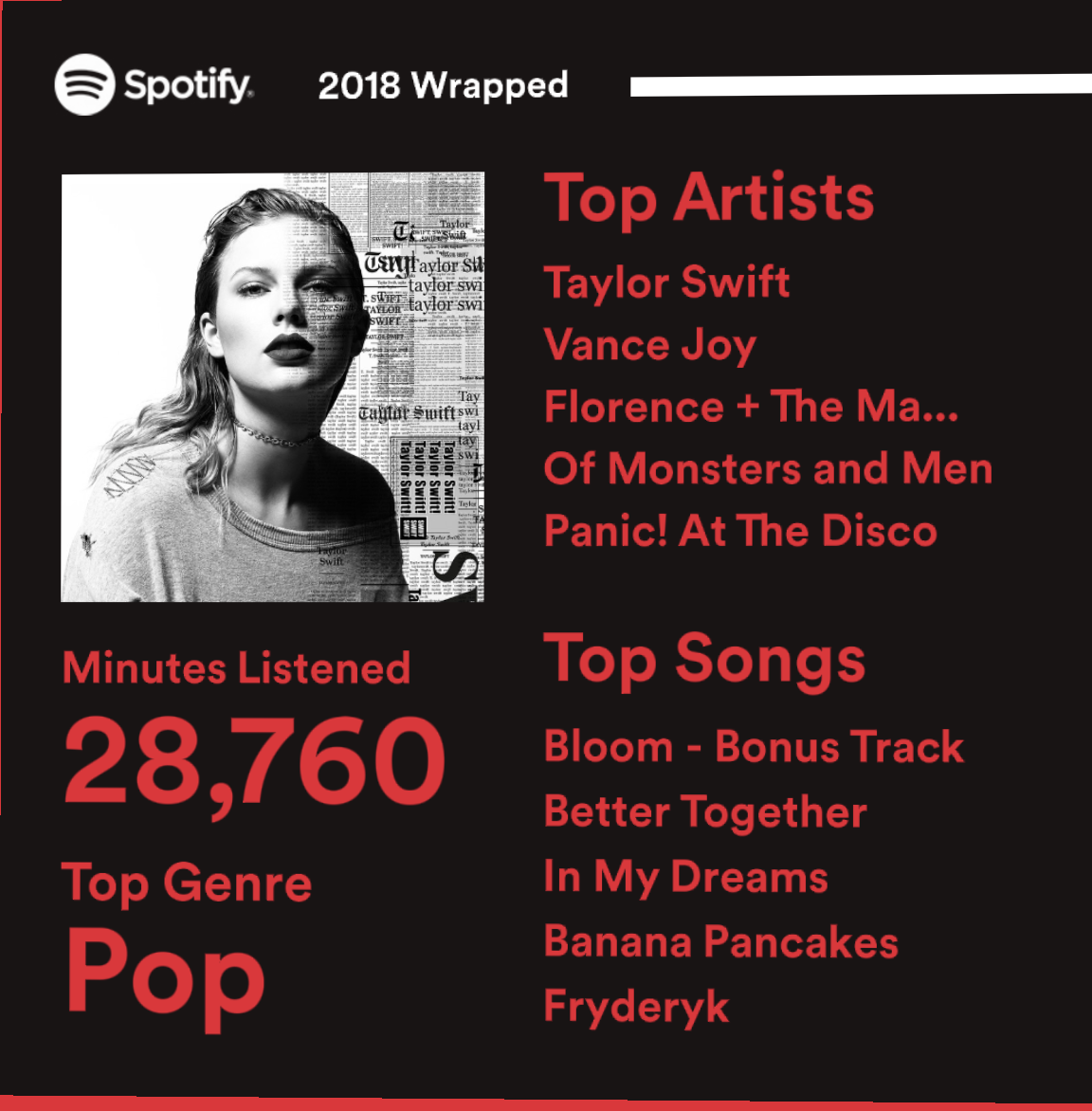 Spotify does this thing at the end of the year where they put together a little interactive slide at the end of the year that puts together all of your music stats for the year. After getting one last year I was really curious to see what my stats would look like this year. A few days ago Spotify released its 2018 Wrapped and, honestly, it is 100% me for this year. When I looked at it, I realized that my wrapped this year capsulated a ton of stories of the past few years and I thought it would be fun to share.

When I saw Taylor Swift is at the top of my list of artists and who I listened to most all year there was no surprise. I’m sure that if someone I knew was to be asked who my favorite artist was they would have no trouble saying, Taylor Swift. She has been a part of who I am for a long time now. I’ve gone to her tours since RED (My favorite album) and each time has been an amazing, unforgettable experience.

I can remember the first moment Taylor came into my life. I had to be 6 maybe 7. I was in first grade and my dad was driving me to school. We were actually on time for once. (I was late to school more often than not in elementary school that the lady at the front desk knew me and would just write my name and class on the late slip without having to ask me anything.) My dad was flipping through radio stations and Teardrops on my Guitar came on. I had to get out of the car before it was over and I was disappointed because I had really started to like it. I hummed the chorus all day. I was hooked from that moment on and 13 years later she is still my favorite.

I owe my love of Vance Joy to Taylor Swift. I had heard Riptide a ton and loved it. I remember putting it on repeat on my laptop as I wrote an essay, but I wasn’t too familiar. But Taylor announced her 1989 tour and Vance would be opening for her. Of course, I had to start looking up everything I could about him and get the album because I was not about to not know his songs if I was to see him. Boy, was I hooked the moment I heard the entire album. It was on repeat in my car for at least a week or two until my mom decided she needed to listen to something else. I learned all his songs from the album and the ep. I started learning songs on the guitar to sing along with, and to this day I am hooked. His voice is so soothing and he is AMAZING live. (My roommate once said he may sound even better live than on his album.) When I saw him play Georgia live I cried, it is my favorite song and I wish I could listen to him sing it live all the time. If you haven’t listened to his albums you need too.

I’ve always liked Florence + the Machine’s sound, but I never really got into their music until this year. Over the summer I listened to Lungs over and over while I did things like clean my room and run errands. Then the newest album came out and I fell in love with some of the songs. And now I listen to the band all the time. As you can see by it being in my top artists. Some of their songs are my favorite to blast in the car and sing at the top of my lungs. This summer when High as Hope was released I spent the hour and a half I had to sit in the parking lot and wait for my brother to finish practice listening to it. I then listened to it the next two days until I had memorized the album. This album even made it into my music of the week post this summer.

OF MONSTERS AND MEN

A band I had liked for a while but over these past few years, they have really begun to be my favorite band. Their sound is really nice and all their songs are fun to sing.

For my 17th birthday, my uncle surprised me with tickets to see them and I think that is when they started to become my favorite. We were on the floor and I was literally a foot from the stage and they just executed this captivating energy when they performed. I smiled the entire concert and even though I had to get up for school the next morning despite getting home at 1am, I didn’t want the concert to end.

PANIC! AT THE DISCO

Back in middle school, like seventh grade, one of my best friends would always come to school in her band tees and talk about the ones she liked. Such as P!ATD. While not a style of music I was accustomed to listening too I decided to look them up because I wanted to see what she liked about them. It was a good decision on my part. It expanded the genres of music I enjoy and gave me another band to add to my list of favorites. P!ATD also made an appearance on my music of the week post and now I am going to see them in a month with my roommate.

This year Spotify wrapped had a lot of stories to tell and I am excited to see what next year has in store. Leave some suggestions of music for me to check out in 2019! 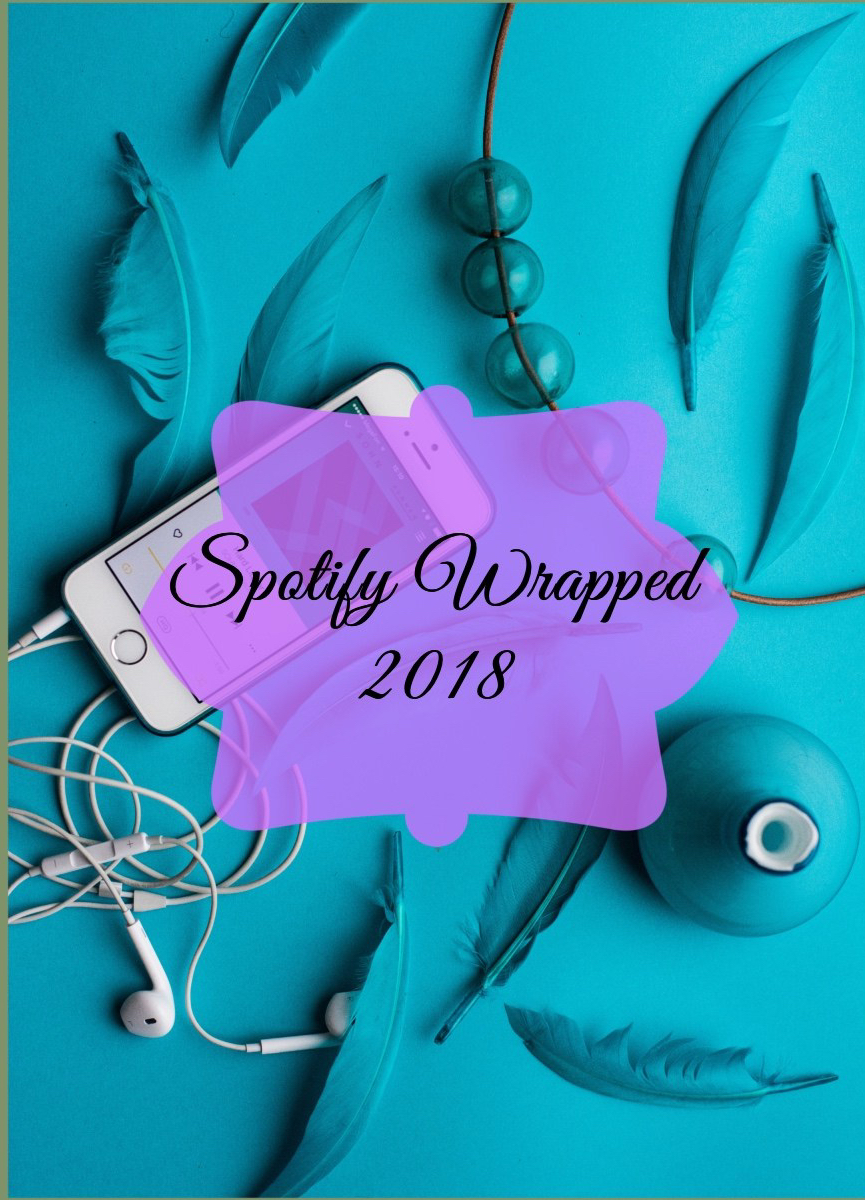